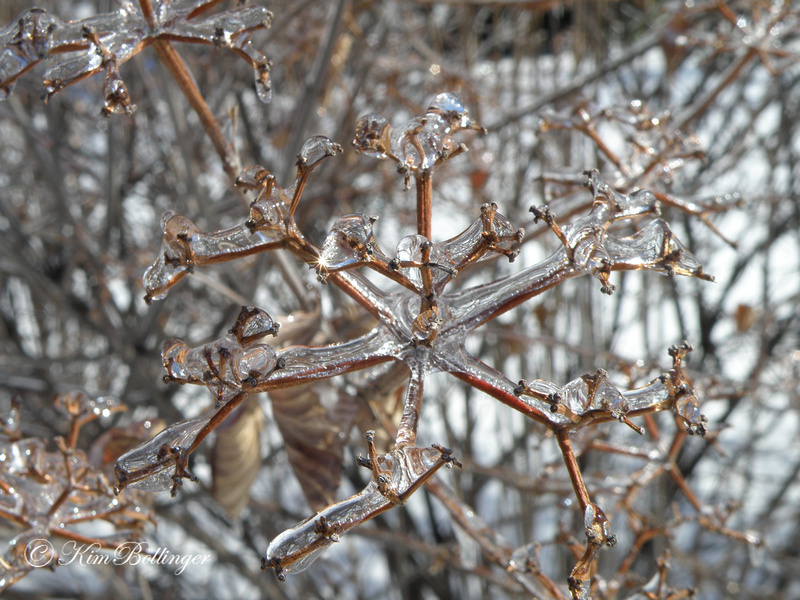 I had a little adventure tonight.  If you live anywhere near the St. Louis area, you know that the weather has been rather frightful out there this December 16th!  It began misting about 3:00 today and by the time I got to my car after work and on the way home, the roads were getting very slick due to temperatures below freezing!  I noticed it even more as I pulled into the grocery store parking lot on my way home.  I had decided to stop and pick up a few things to make potato soup for dinner.  I stepped out of the car and the skating began!  At that moment something inside said, "Slow down, Kim.  All you need are two broken elbows and a face cast!"

The closer I got to home, the more treacherous the roads seemed to get.  The traffic was moving at a snail's pace by then and people were spinning crossways here and there!  For some, getting home might not have been too bad as long as long as they were going very slow.  I knew my problem would be more than getting to my driveway...we live on a small mountain...you can ask our first time visitors!  :)  The road to the top (which is where we live) is about a 1/2 mile, including switchbacks and straight up-hill driving for the most part.  So...I decided this girl was not going to be the one to slide off the side of the hill by trying to rip up the driveway in one super-hero attempt to skim over a glazed ski-lift-like road!  I opted to park my car at the bottom of the hill where there is ample room for my car and a few others.  (Kinda think someone planned it that way!)

So...I grabbed my heavy work lap top, 4 bags of groceries and my purse, pulled on my gloves, locked the car and put my head down to begin my ascent to the top of the ridge!  Well...my first step onto the pavement sent me dancing backwards a bit as it was slicker than it even looked!  I was beginning to wonder if I'd be camping in my car!  I walked to the shoulder and decided the leaves and brush were easier to walk on than the blacktop!  Made it up the first major incline, huffing and puffing.  Threw the bags down and realized that if I had a heart attack now, no one would find me because it seemed everyone else was either out or in for the night!  Could it be that I was the only stupid person on this mountain??

I got to the middle of the first switchback and decided to cut through the woods to the second stretch of road, which I could see - yep, straight up!  Now...walking through Jefferson County woods comes with surprises.  Underneath a thick leaf blanket, large rocks and logs are hard to see!  Sooo....I stumbled all the way to the top, stopping frequently to breath and check my pulse!  :)

It was good to conquer the woodsy cut-through and stand there on the pavement again.  I knew that if I died right there, at least the hearse could get me out!  One more major uphill incline to go.  After resting a bit, I ditched the funeral home idea and started to ponder whether or not Superman could have accomplished what I just did!  A couple of giggles later, I picked up my "luggage" and lunged forward with new optimism!  Before long I was coming in for the landing, wherein I promptly dropped all bags on the front porch and plopped my panting self onto the porch swing.  I'd made it!  It seemed a flag raising ceremony was in order!

Instead I threw a few pieces of wood in the fireplace, fell into a comfy chair - and said a little "thank You".   That fire was especially nice, even though I was in no shape to take a lot of time to build it!  I'm thankful for little happy endings tonight!