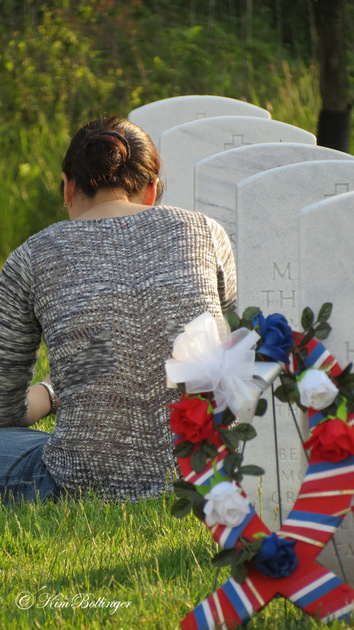 The birthday of our America.  It means so much more than a celebration.  It means so much more than fireworks and barbecue and watermelon. Those are all good things, but as I really contemplate the cost to be free, my heart begins to feel the fear and grief that goes with what our forefathers and pioneers went through to cut the paths of liberty for all. Much pain and many lost lives were the sacrifice.  War, the separation of families, friends and neighbors, uncertainty, discomfort, sickness and death are the cobblestones upon which we as Americans now walk.

This country has been blessed with abundance - so much so, that we have perhaps forgotten the expense at which it has come.  The generations that bought and paid for our independence have almost all gone on before us.  I raise the banner once again here as a reminder and a salute to those brave men and women who made ultimate sacrifices and lived their lives with loyalty to something they believed in - our freedom.

I raise that banner even higher to honor the ONE who offered eternal freedom.  We may not be so fortunate to hold our nation's liberty for many more years.  We have slowly offered this precious "one nation under God" into the hands of a nation under a government.  I have seen much in these past few years that concern me and bring me to my knees as I ask forgiveness on behalf of the decisions of the leadership of our country.  It seems to me that there is much compromise, greed, dishonesty and pride. I too often see a mesmerized people nodding under a spell of a money-hungry government seemingly unconcerned about God or His will being done among us.

Now there are many gods to whom our nation bows and honors.  Money, possessions, wealth, people, indulgences, and even false gods that have been in direct conflict with the God of Abraham - discounting the work of the cross that offers our own salvation, blessings and eternal promise.

Let us pray in this hour...for repentant hearts who would turn in surrender to the God who does indeed forgive and deliver. Let us pray for our leaders and our government to be challenged to honesty and truth.  Let us pray for those who continue to lose loved one as a result of war and tragedy in a world where it seems that God is not wanted and therefore unable to bestow blessing, help and favor.  Let us pray that people will once again consider the God who has given so much to this incredible land for so many decades.  He has not turned His back on us, it is America who must turn back to Him. God have mercy on this country and draw your people back to You.